During the First ever 12 hours Impro Marathon in Bulgaria for the first time were awarded prizes for best Solo Improvisation Comedy Show. The competition was very strong. The organisers had plan A, plan B and plan C for the winner. 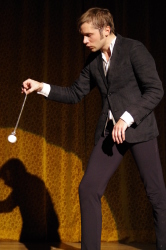 We congratulate Caspar Schjelbred and we hope that he will take part in the second edition of the Impro Marathon in 2015.